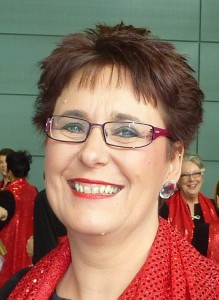 Lindsey was introduced to Barbershop in the UK in 1992.  She joined Sydneytown Chorus after moving to Australia then became a founding member of the Circular Keys Chorus.  In 1998 Lindsey returned to Sydneytown Chorus, this time as their Director.  In 2005 Lindsey became the founding director of  Aurora Australis.  In 2007 she moved to Perth, Western Australia and formed part of the team that founded A Cappella West – their founding director!

Lindsey was a Master Director, a motivational and enthusiastic coach and teacher and a joyful person who made an impression on everyone she met. Lindsey also sang bass in three Regional Champion Quartets:  iCappella, Hi-Jinx and Enchant, all three of which achieved regional high scores. She holds the record for the most Bass Golds in Australia at 8 regional championships.

In 2018 Lindsey was diagnosed with metastatic breast cancer and although she fought bravely for 16 months, she was taken from us in October 2019. We will always have you with us, Lindsey. Thank you for the music and for the joy you brought to our lives.